Covid-19 caused us to tuck into our home and not really go out at all.  While Hubby had an outpatient surgery scheduled for January 2021, that was the only risk we had to take since lockdown.

In 2020, for Mother’s Day, Hubby insisted I should not cook.  We went into “Old Town” to a known restaurant (eaten there a number of times pre-Covid) and ordered a “to-go” Chicken Caesar salad.  Not saying the restaurant is no longer a favorite, however the salad was seriously lacking in quality, taste and pretty much anything else you can think of (wilted, tasteless and unappealing visually). END_OF_DOCUMENT_TOKEN_TO_BE_REPLACED

Posted in Healthy Eating, Urban gardening | Comments Off on The Urban Gardener (2021 version)

Tuna salad with a twist

All my adult cooking life I purchased Tuna in the can without regard to its form.  In the past few years the tuna in a can that I always purchased seems to be more water and less what I considered to be tuna.  The tuna there was was low quality, bits and bites of what, in my younger years in Hawaii, would have been chum I used for trolling from a boat while fishing. Today I buy solid white Albacore in oil for a higher quality, finished product.  I recommend that kind of solid tuna for this salad. END_OF_DOCUMENT_TOKEN_TO_BE_REPLACED

I love coleslaw but I have always taken the “easy and fast” way out with it, buying bottled coleslaw dressing or a coleslaw “kit” in the bag. Now I am a convert – yes, it took maybe 15 minutes to make this coleslaw dressing (and yes, I purchased a 14 ounce bag of shredded green cabbage, carrot and red cabbage, so I cheated a little).

END_OF_DOCUMENT_TOKEN_TO_BE_REPLACED 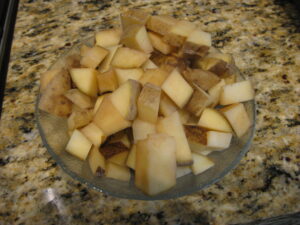 huge russet potatoes a couple of days ago.  They look like they are this year’s crop, at least.  I decided with one I would make a soup.  With another I will be making Colcannon (Irish mashed potatoes) and the other two I am going to dice up and dehydrate for the coming winter.  We can’t eat four huge potatoes before they go off so drying is my go-to method for preservation (although freezing comes in second, only due to space in the freezer which is full to the brim from our summer gardening bounty).  I admit I am looking forward to just cooking with all the yum-licious foods I have been preserving since last Spring. However, I am growing weary of the preservation jobs. END_OF_DOCUMENT_TOKEN_TO_BE_REPLACED

For my first experiment with this soup, I used both diced and sliced dehydrated potatoes.

I had received a free ten pound bag of Russets in the fall of 2020. With just the two of us, that was more than we could eat before it would go to ruin. So I bought a dehydrator and got to work.  The mandolin is helpful with slicing of vegetables. I made the potato slices 1/8th inch thick.  The dice was roughly a quarter inch dice.  In order to keep the potatoes from turning an off color, after slicing and dicing, I put them into a pot of boiling water to which I had added the juice of a half of a lemon. They stayed in the water about 4 minutes. Then, with a spyder ladle, I lifted them out and into ice water to stop the cooking.  Then I drained them thoroughly and patted them dry before putting onto the shelves of the dehydrator.  It takes about 6 -8 hours to dehydrate the 6 shelves of potato slices at 165 degrees Fahrenheit. I then loaded the potatoes into quart mason jars and used a Food Saver type machine with a “wide-mouth” jar device to seal the jars. Then into the pantry they went.

To rehydrate, I put them in a bowl and poured warm water over them.  In about 10 minutes, they were ready to add to the soup. It turned out beyond delicious! It also cut the time it took to make the soup because the potatoes were partially cooked.

The other ingredient I want to emphasize is the broth. I used a home-made celery broth. Every time I buy a stalk of celery, I make every effort to buy with a lot of greenery on the ends and the interior. Everything I trim from the individual stalks goes into a pot of boiling water. Sometimes I add other vegetables, but mostly we like the celery broth straight up.  I do not add salt, spices or herbs to this broth.  I try to keep it as neutral as possible. I save other trimmings of vegetables for a vegetable broth (carrot peelings and ends, onion bits, radish tops, turnip tops, broccoli stems, etc.). I will have a section on broths shortly posted here.