To carbonate, or not to carbonate – that is the question?

I have resisted purchasing a carbonator machine for many years. I went to Los Cabo in 2009 and was fascinated by a carbonated margarita served at the Las Ventanas Hotel.  I came back and found a ISI Soda Siphon which I used to make a similar drink since the hotel manager shared the recipe with me at the time.

Since my discovery of shrubs, I decided to investigate the products available today for carbonating water. If I were still going to make the carbonated margarita, I would likely dig out the ISI siphon since carbonators recommend only carbonating cold water. There are a variety of products advertised and lots of reviews, such as the one from SweetHome, which influenced my purchase. I shopped Amazon, Ebay and Bed-Bath-And-Beyond. I opted to go to Bed, Bath and Beyond because it meant I had immediate gratification. 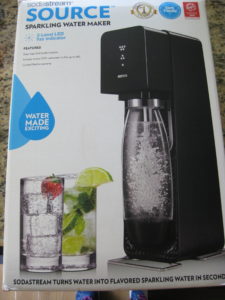 I purchased the Soda Stream Source Starter Kit. I thought at first I had not gotten the complete kit which was to contain the machine, one bottle of CO2 and a bottle.  Turned out the bottle was inside the machine where the CO2 goes. I washed the bottle and filled it with water from my reverse osmosis filter tap. I drink only filtered water as I found I had an allergy to the fluoride that is added to the water. After several hours of chilling the water, I carbonated my first one-liter bottle.  The Source Soda Stream has lights on the front of it to tell you how much carbonation you are using. I decided the first bottle should be at the medium carbonation and went for the two level. You push down on the carbonating block, hold for 1-2 seconds until the first level lights up.  Release, wait until the light goes out and the head returns to its upward position. Then you press again and hold for the second level of lights to light up. That is a medium level of carbonation. I used that liter of water that same day, so I chilled another bottle overnight and decided to try for the third level of carbonation, just to see the difference. The process is the same other than waiting for that third level of carbonation.  I find I like the third level of carbonation the best, although I realize I may not get 60 liters of carbonation out of the CO2 canister. 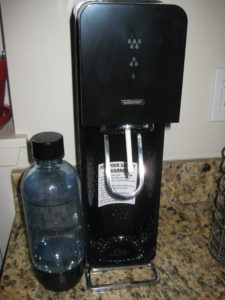 HINT:  Be sure to take a 20% off coupon if you purchase from Bed Bath and Beyond. I purchased 2 extra 1-liter bottles which were priced at $19.99 and used a $5 off $15 purchase for that. I saved $25 total. It made the whole package compatible to the Amazon and Ebay prices and I had my immediate gratification. <smile>

This entry was posted in Products-Equipment, Reviews. Bookmark the permalink.
Share